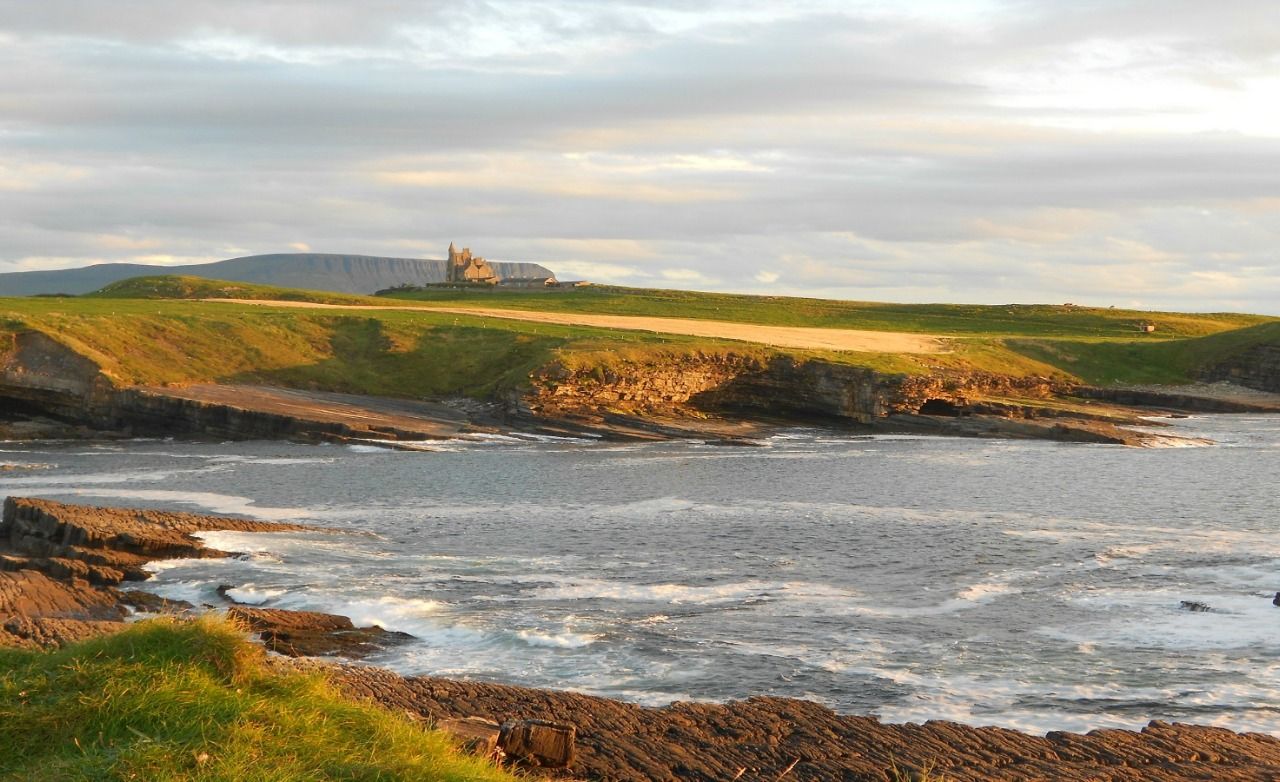 Lissadell Estate and Gardens is famous as the childhood home of Constance Markievicz, her sister Eva Gore Booth and her brother Josslyn Gore Booth. Constance was one of the leaders of the 1916 Rising, and was the first woman to be elected to Dail Eireann, where she served as Minister for Labour (thus becoming the first woman minister in a modern European democracy), and was also the first woman to be elected to the House of Commons at Westminster, London (where she declined to take her seat). Eva was a poet of distinction and an active suffragist, clashing with the young Winston Churchill over barmaids' rights in 1908. Josslyn created at Lissadell one of the premier horticultural estates in Europe. This horticultural enterprise has now been recreated at Lissadell. The great poet W. B. Yeats was friendly with the Gore Booth sisters and stayed at Lissadell in 1893 and 1894.

Yeats' Grave & Drumcliffe Churchyard - Nobel prizewinning Irish poet William Butler Yeats chose in one of his final poems, his own last resting place - Drumcliffe ‘under bare Benbulbens head’. He was finally laid to rest as he desired, beside the church where his great grandfather had come as a rector one hundred and thirty seven years previously. An epitaph is a short and often clever last message to the living found on gravestones. W.B Yeats’s epitaph reads ‘Cast a cold Eye On life, on death Horseman, pass by’! Drumcliffe churchyard also includes the remains of a High Tower and a High Cross constructed in the 11th century when there was a Christian monastery on the site. Drumcliffe Tea House and Craft Shop serve scrumptious homemade food and goodies and have a wide selection of high quality crafts on sale.

Knocknarea Mountain - The 327 m (1072.83ft) high mountain known as Knocknarea (Irish: Cnoc na Rí ) totally dominates the Cuil Irra peninsula. Sitting proudly on top is Queen Maebh’s Cairn ( Miosgán Meadhbha), a neolithic passage tomb. The cairn is 55m (180.45ft) wide by 10m(32.8ft) high and has never been excavated. It is directly in line with Carrowmore and other associated ancient sites in Sligo and beyond. There is a walking trail (really a dirt track) to the top and the walk is suitable for most fitness levels. The vista from the top is well worth the effort to get there! It is said that Queen Maebh a legendary chieftain queen of Connaught is buried beneath the cairn in full battle regalia, standing upright and facing her enemies in Ulster. Tradition suggests to bring a rock from the base to leave on the Cairn to receive good luck.
Carrowmore - Carrowmore, County Sligo is one of the four major passage tomb cemeteries in Ireland. It is the most extensive in Europe and older than the pyramids. It is located at the centre of a prehistoric ritual landscape on the Cúil Irra peninsula. This is the largest cemetery of megalithic tombs in Ireland and is also among the country’s oldest, with monuments ranging from five and a half thousand to six and a half thousand years old. Archaeologists have recorded over 60 tombs of which 30 are visible. A restored cottage houses an exhibition relating to the site.

Eagles Flying - THE ATTRACTION FOR ALL THE FAMILY - excitement, fun, photo opportunities and much more at affordable prices. Situated amid the beautiful landscape of North-West Ireland is Eagles Flying, the largest Centre for Birds of Prey and Owls in the country. Come join us for the fantastic and memorable experience of majestic raptors soaring over one of the most lovely locations to be found. Watch our shows! GET UP CLOSE TO THE MASTERS OF THE SKY!!! Experience some of the biggest birds of prey in the world flying right over your head or landing next to you. Watch different species of eagles hunting on prey-dummies in their natural environment. Be astonished about the arrow like flight of the falcons and the amazing intelligence of the vultures. During the Flying Demonstrations scientists will share with you the biology of the raptors and their important role in nature and questions will gladly be answered. Educating you about these birds also means safeguarding these endangered species for future generations as you will learn how to do your share in protecting our nature.
Lough Key Forest Park - A lakeside centre providing an ideal gateway for gentle leisurely activities or more energetic pursuits in the Park. Tree Canopy Walk - 19th Century Servant Tunnels - Moylurg Tower - Boda Borg - Lakeside Cafe - Gift Shop - Adventure Play Kingdom - Forest & Parkland Trails, Bog Gardens, Lakeside Walks & 19th Century Bridges
Perfect Days Surfing - Learn to surf or improve your surfing skills. Based at world renowned Strandhill beach, lessons include surf equipment and numbers are kept small for maximum learning opportunities.
A Day at the Races - Sligo Races makes for a truly entertaining and exciting day out. Enjoy the exhilarating sound of thundering hooves and the thrill of a win.
Berties Pitch & Putt and Driving Range - open from 9am until dusk, 7 days a week. The course consists of 18 holes, the longest being 70 metres and the shortest, 43 metres. We cater for all age groups, from juveniles to senior citizens and all equipment is provided including clubs, balls and tees.
Island View Riding Stables - Family run horse farm specializes in beach rides in Sligo and Dongeal Bay. There are ponies and horses for everyone, big or small, beginners or advances, you will find a perfect partner here. Horseriding on the beach for al
Sligo Folk Park - Take a Trip Back in Time and immerse yourself in a time gone by. A great day out for all the family.
North West Adventure - White water kayaking, canoeing, rock climbing, hill walking and wilderness, camping and team building.
For More Information or other ideas see Adventure Hub
READ MORE